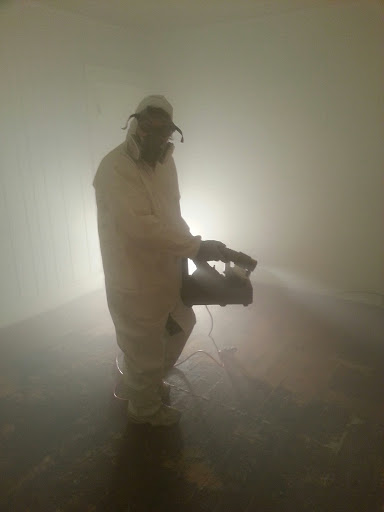 Explanation for the residual barrier left behind after using any of the 2 part formulations. There has been a longtime mystery for the so called “invisible barrier” left behind resisting microbial growth on surfaces treated. These surfaces or substrates include but are not limited to the following; Carpet, clothing, brick, vinyl (fences, siding, curtains – poultry barns), cement, stucco, all wood for construction, HVAC ducting, evaporator coil pans, sheetrock, filter material, etc. etc. Unlocking the mystery has been quite puzzling and from recent lab testing here at AuntieGen some discoveries have taken place to explain this phenomenon;

The reactivity and “dwell” time of the 2 formulations mixed eventually breaks each formulation down to the so called “barrier”. During this “dwell” time the 2 parts are capable of penetrating spore walls and neutralizing the mycotoxins or cytotoxins within the spore. Because of this it becomes extremely effective when used in a fog application. The fog or mist is atomized to a small enough micron to hang in an air space long enough to degrade and destroy any airborne spore or surface mold spore or colony.

The so called “barrier” is the resulting chemical reaction of the 2 components degrading each other to the point of making a “hardened” surface, mostly of an Alkali and peroxycarbonate.  A portion of the alkali (carbonate) rearranges in such a manner to form a water insoluble compound. This compound “barrier” creates an alkaline surface with a pH high enough – (pH of over 8), to deter and inhibit growth of microorganisms.

This resulting barrier would also be able to be classified as a “green” final composition given the decomposition of most initial ingredients. And the so called “residue” left behind would be classified as a mined substance. The benefit of such an “invisible barrier” would be the fact that it would be completely non-toxic, extremely resistant to microorganism growth, mold and algae. The real benefit is while the 2 parts are active (8 to 12 hours) it becomes deadly to any spore (mold or other), bacteria, virus or microorganism. And having this product also capable of creating a “zone of inhibition” it really becomes a standalone 2 part formulation unlike anything on the market.

Treating substrates such as sheetrock paper, plastics, vinyl, or even air filtration material become reality, and now to claim not only killing microorganisms, but creating a barrier that is resistant for any growth and is water insoluble is quite remarkable. Decontamination and cleaning test sites on roofs, decks, siding, (vinyl & stucco) have been ongoing for up to 20 years. Also remodel projects with moisture intrusions creating mold issues have been conducted. There has been no recorded re growth of any mold or algae on any surfaces treated with the use of our formula. Mold remediation in homes and commercial properties using AuntieGen’s formula is in the hundreds of thousands of square footage treated by the fogging and spraying method. Industrial Hygienists have been engaged for testing spore activity before and after.

The incredible resulting tests have indicated the non-viable spore counts to be near zero on most sites. With again a residue that is nontoxic, nonflammable and completely environmentally safe, we feel as though there is nothing like this patented product. The uses are endless and with creative business partners this needs to be marketed for full advantage of all these benefits. With comparisons being made daily to all other products on the market – there has not been one that can claim these safety standards and perform even close to our line of products. National laboratories Patents, and have the same characteristics in creating residual “zones of inhibition”.