In the old days, before the internet, investor relations departments operated with the telephone and paper based communications. (You remember getting letters with stamps on them, don’t you?)

If you were a large corporation with a significant shareholder base, this meant that at certain times during the year, the volume of phone calls and letters would spike. Usually these increases would be around the issuance of dividend checks (When are they coming? Why haven’t I received mine? How do I replace a lost check?), and the annual general meeting (When is it? Where is it? Can my Aunt Sophie come too?), but certain other types of calls would occur with great regularity as well.

Around tax time, for example, many calls would come in trying to find out how much the shareholder had received in dividends over the past year as they had mislaid the tax reporting form mailed to them in January. Or the shareholder needed to figure out the tax cost basis of the stock they sold in the prior year. Or they had lost their stock certificate. The list goes on, but I will spare you.

The resulting quantity of calls and letters meant that the investor relations staff was stretched, response times slowed down and shareholders were not given the prompt attention they would normally receive. Authorizing more payroll to fix the problem was not considered a good fix as companies do not staff to meet peak demands. So we muddled through and breathed a sigh of relief when things calmed down.

Fortunately, the advent of company investor websites means that it is now possible to allow shareholders to look up much of this information for themselves. Further, they can do this whenever they want to, as opposed to being forced to call during business hours. Well designed Frequently Asked Questions sections (FAQs) can be very helpful in getting information to shareholders before they get frustrated.

Now most of the calls we receive are to help our investors remember login or password. 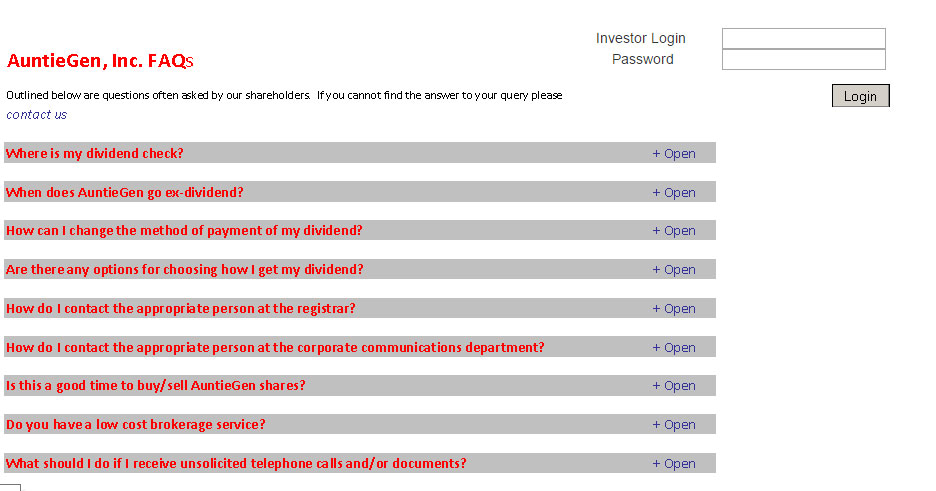